March Gaming Schedule at the Hangar

Here are some gaming dates coming up for March at the Hangar - (note, Saturdays not included, but always something going on)

See you at the tables!
http://www.odms-club.com/

Tracy Johnson posted the logsheets from the Close Action games he hosted at the Williamsburg Muster. Both of these games looked really good.

Field of Glory - at the Hangar March 19

Scott has volunteered to run some ancients, using Field of Glory on March 19th at the Hangar. I can't wait... 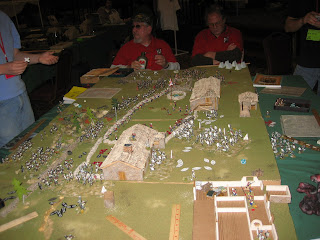 Here is a link to all the details, on the Battle Hymn myspace page.

Here is the gaming schedule (10 tables). 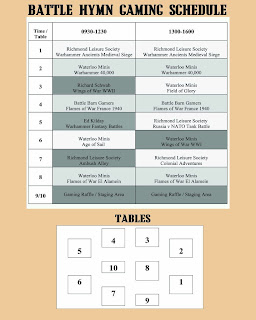 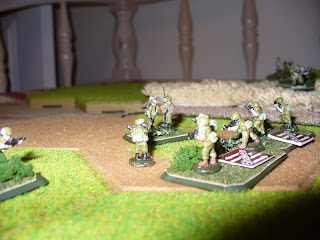 This is an AAR from Joe - The_Legans4@msn.com
Started a infantry platoon using my infantry rules. Had my third game and thought I would share the AAR with the group.

It was damn hot! The thermometer was at 102 F. Lt Jaroze's platoon had been inserted into the valley this morning after Charlie had attacked a special forces camp last night. They were to sweep a hamlet on the way to the river in the valley. They had found little in the hamlet except some mongrel dogs. Now onto the river; down a cart path. There were rice patties on the left just hidden by a hedge that ran along the road, a barn on the right and elephant grass all around.

Lt Jaroze was one of those leaders who instinctively knew what to do. (gr IV dynamic leader). He reflected on his men. SSgt Davis was a solid influence (gr III) and Jaroze wish he had 3 clones. 2nd squad had Sgt Tillman (gr I ). Tillman was terrible and his squad knew it. 2 missions ago Tillman had lost 3 KIA and worse had 2 POW when Charlie uncharacteristically closed and physically drove the squad out of a hamlet while Jaroze was on the other side of several buildings. Lt Jaroze had requested Sgt Tillman be relieved but the Captain would have no of it. " All he needs is some mentoring, besides there is no one else available." is what he was told. Sgt Colton (gr I) had the third squad and while he was weak, he was better than Tillman.

Lt Jaroze vacillated between giving Tillman the toughest jobs hoping he would be wounded and giving him the easiest so his men wouldn't be captured. He kept Tillman back during the sweep. He now put Tillman's squad on point along the cart path to the river. It should be easy since the obvious place for Charlie to strike would have been from the hamlet. Ssgt Davis was with first squad and a pig (M60 LMG) 40 yards behind. Jaroze followed with 3rd squad and a second pig to keep tabs on Sgt Colton. 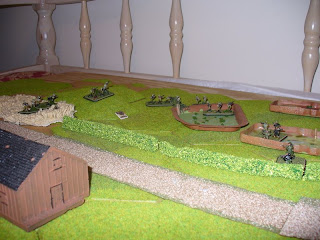 Up ahead automatic weapons fire shook Jaroze out of his ponderings. Sgt Tillman reported over the net that they had walked into an ambush to the front (bunker in the elephant grass) and from behind the hedge to the left. He had 3 down and was retreating to the barn on the right. Jaroze cursed his decision to let Tillman lead. He immediately ordered Davis to take his squad left and fire down the hedge line. He moved up to get a better look at the situation. Automatic fire (MMG) was sweeping the path and now turned to the barn where Tillman's squad lay shaken. He radioed Tillman to lay suppressive fire on the MG so Davis could move up. He had just ordered Sgt Colton's squad to sweep left around a hill to take the MG from the rear when Sgt Tillman and 5 grunts came streaming out of the barn towards the hamlet. Jaroze was so furious he forgot the fire sweeping the road and stopped his 6 charges 20 yards from the barn.

He rallied them and sent them back. picture 1 SSgt Davis had by now cleared the hedge of VC as evidenced by 3 motionless bodies clad in black. Where the h--- was Colton? Sgt Colton was cautiously working his way around the hill; too cautiously
for Jaroze's liking. The MG was tearing into the barn where Sgt Tillman's men were at least now firing at the MMG. Jaroze caught up with Colton and started them moving in a hurry. They ran into a squad of VC in the paddies and Pvt Hocking went down with a bad stomach wound. Jaroze working in tandem with SSgt Davis drove the
VC out of the paddies and into the elephant grass. Lt Jaroze drove his men to cross the road but the VC machine gunners were faster.

SSgt Davis's squad did manage to catch 4 VC crossing the path into the elephant grass and they paid the ultimate price for their communist ideology. By the time 3rd squad found the back of the VC bunker the gun and men had fled.

2 american KIA and 2 WIA while the VC lost 6 KIA including 1 leader and several blood trails led through the grass.

After the game Lt Jaroze had a 50% chance of relieving Tillman and missed his roll. Will Tillman get killed? fragged? better? Who knows, but that is half the fun I get from playing.

Thursday, Feb 19, AAR from the Hangar

Wow! What a great turnout. There were something like 20 gamers at peak time at the Hangar for our weekly ODMS meeting.

Spotted were a number of games - Classic BattleTech, Flames of War (a couple of games), Fast Warrior, and the ever-lovin Settlers of Catan.

New projects mentioned - (1) rumor of more rule sets to be published by ODMS guys... I guess there is publication envy for Justin's "Go for Broke", (2) Russian Civil War next two weeks (chuck getting ready for his Cold Wars game), (3) Frontline General tactical situation next week (miniatures based), (4) Vietnam as delivered by Carl - he has dug out dozens of troops and helicopters, and has started making some rice paddies, (5) Napoleonics - 15mm John Callahan, (6) Ancients - Danny's rules as well as Warhammer Ancients, DBA (this saturday) and more Fast Warrior, (7) ACW - Paul, I believe.

Lets keep the momentum going - volunteer to run or play games, and get the word out.

I hope that we have a great ODMS showing - at least a couple of ODMS related Dealers will be present (Miniatures of Chesepeake, Cotton Jim, Quartermaster).

David D will be hosting DBA at the Hangar on Saturday, beginning at 1pm. DBA is cool. You should play.

ODMS will be at Cold Wars. The theme this year is "Long Live the Revolution" - wars of Revolution. The only official ODMS event is "Last Charge of Colonel Bulgarov" - an RCW game being hosted Friday at Noon. Here is the excerpt from the online PEL -

F-106 - Last Charge of Colonel Bulgarov - Theme Game
Fri. 12:00 PM, 3 hrs, 6 players
GM: Charles Turnitsa
Sponsor: Old Dominion Military Society
Inter-War 15mm, Rules: Forward Comrades!
The old man and his beloved Cossacks have come to join the White's cause and are seeking to throw the Reds out of the railroad village of Ritvosk. The freshly appointed Cheka director in the Ritvosk Administrative Sector is looking to make a name for himself in the new Government, so he has decided to rouse the Red Guard in defense of the People's Railroad Station, and to destroy that old regime drunkard, Colonel Bulgarov. A fun RCW game, featuring armored cars, tanks, cossacks, and lots of Reds eager to die for the cause.
Beginner Friendly, Rules Taught.

In addition, there will be a number of ODMS gamers taking part in several of the tournaments and other events.

There are at least two ODMS related Dealers that will be at the show - Miniatures of Chesapeake and Cotton Jim Flags.

Of other related local gaming clubs (especially our Sister organization in Williamsburg - the Battle Barn Gamers) we hope to see some attendees as well. Hopefully the weather will be great!

Good comments on the Muster on TMP

The Miniatures Page (TMP) has a thread with good feedback and comments on the Williamsburg Muster.

Charles Cabell - a good friend of Kai's from Fort Mill (one town over from where I lived in South Carolina) got some great photos of the show. Wow.
http://picasaweb.google.com/charlescab/WilliamsburgMuster#

Great comments from the guys in TSS on their mailing list, and also from the SMP guys.

I think we had a winner - and there is already anticipation for next year! 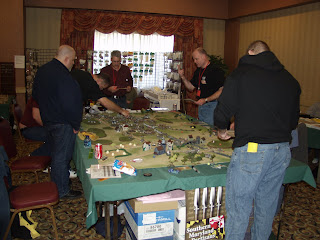 Patrick Berkebile - with the Southern Maryland Partizans wargaming club - hosted the battle of Vittoria early on Saturday morning. It was a very well attended, attractive game. One of many at the Muster in 09. 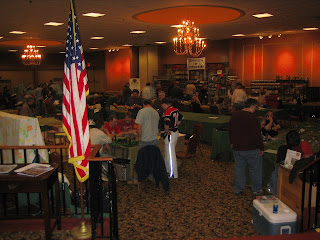 The convention, now over, was a great success for its first year.

There were, in attendance, over 210 at the Muster. This includes 29 vendors, 44 game masters, and the rest gamers!

Reports of games, tournaments, prizes, the raffle, and stories of horror and delight are surely to follow.

The follow on event - Williamsburg Muster 2010 is already being planned for February 5,6,7 of 2010! Make sure to clear your calendar!

Williamsburg Muster - one day until set up

We will be doing regular posts of what's happening with the Muster, as they unfold. Watch this space!