Location is Southern Pines, NC. (one hour south of Raleigh).

This is just one week before our convention, so would be a great warm up event!
No comments:

These are the expanded scenario notes for Cliff Creech's scenario, Apache Pass, that he will be running at Guns of August 2011. There is a great article online discussing the battle. Cliff will be running his game on Friday and again on Sunday morning. 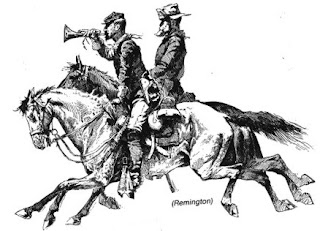 At noon on July 15, the Union column was attacked by some 500 Apache warriors led by Mangas Coloradas and Cochise. Geronimo, sometime before his death in 1909, claimed to have fought in this battle but this has never been confirmed.

The Americans were not in a good position to fight. They had just walked dozens of miles across the hot Arizona desert, they were heading for the spring at Apache Pass which was now beyond an army of well armed Chiricahua warriors.

Lacking water, and with the risk of losing dozens of men by retreating back to Tucson without water, the column's commander, Lt. Thomas L. Roberts chose to fight. The natives had constructed defenses, several breastworks made of stone. They also had set up an ambush, they waited until the Americans came within thirty to eighty yards of their positions, then opened fire.

Behind almost every mesquite tree and boulder hid an Apache with his rifle, six-shooter and knife. At first the Union troops could barely see the natives firing on them. After a few more moments of intense combat Roberts ordered retreat, so his force withdrew to the mouth of Apache Pass, regrouped and unlimbered mountain howitzers for a second advance.

This was one of the first times the United States Army had been able to use artillery against the native Americans. Roberts ordered his infantry to take the hills overlooking the pass, while he, his officers and howitzers stayed inside of the pass to direct artillery support. The skirmishers moved forward, where they came across an abandoned Butterfield Overland Mail station, which was then used to provide cover from the accurate Apache rifle fire. The infantry was now about 600 yards from the spring, overlooking the water supply were two hills, one that overlooked from the east, the other from the south. On both of the steep hills sat the breastworks, manned by Apache riflemen, doing their best to keep back the American skirmishers.

Roberts moved his howitzers forward and commenced fire along with his infantry, the shots were not very effective because of their position some 300 to 400 feet below the Apache defenses. The artillery would have to be moved again if it was to be effective in this battle. So again the artillery was movedforward, under heavy enemy fire.

Once the guns were in effective range, the commanding sergeant ordered his artillerymen to engage.

Until nightfall the Apaches were bombarded when they broke and fled the engagement in all directions, abandoning the breastworks and leaving the Union troops with a victory and access to the spring.
No comments:

Guns of August - coming up in just a few weeks!!

Lots of up to date information at the Guns of August website.

Over 60 events in our Preliminary Event Listing, covering miniatures and boardgaming.

Over 20 events in our RPG listing, covering all sorts of RPGs.