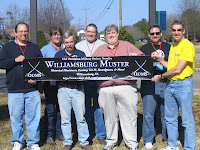 Coming Soon - a revamp of the Williamsburg Muster website, with pictures from 2009!

Okay, the next two months already have some games/events planned - here is the list so far

Send more games to cturnitsa@yahoo.com or the ODMS or Hangar mailing lists.

The Die is Cast - an upcoming DBA Tournament, to be held in the month of June.

If there is enough player interest, I would like to run a DBA tournament during the month of June. As this tournament will stretch over four weeks, it is similar to a mapless campaign. Each battle will follow the normal rules of DBA v2.0 for terrain selection and set up. The referree (Chuck) will provide a number of pre-made playmaps for the typical terrain types of armies of this era. The games will be played in 15mm. If you want to play but don't have an army, then let me know and I can gladly lend you one. The tournament has a handicap/points system to determine the winners (four trophies, provided by me), but the players only need to be worried about playing games. As many as possible, and wherever is convenient for the players (at home, at the Hangar, at the Battle Barn, etc).


Tournament Name: The End of the Republic

Tournament Theme: The final century of the Roman Republic and the first century of the Roman Imperium saw warfare involving some of the most colorful empires and leaders in all of history. This is an exciting time to wargame, and the variety of armies really lends itself to a DBA tournament.

Description: Beginning with the reforms of Marius in the Roman army (107BC), and leading through the following two hundred years, some of the most colorful military leaders would battle in and around the Mediterranean basin. Leaders such as Marius, Jugurtha, Boudica, Vercingeterox, Agricola, Mithradates, Cleopatra, Sulla, Pompey, not to mention Julius Caesar and Marc Antony make this a very exciting period to wargame in. The Roman Legions are just the start. There are exciting armies to command ranging from the Numidians and Ptolemaic Egyptians of North Africa through the Gauls and Germans of Europe, and the armies of Pontus and Judea in the east. All of the classic troop types represented in DBA are available here. There are chariot armies, pike armies, warband armies, and blade armies. A ripe field for tournament play.

Awards:
Four awards will be made, with trophies, to be labelled with the winning player's names, and to be displayed at the Hanger and on the ODMS website - these include "Dicatator of Rome", "Magister of Equitum", "Orator of the Senate", and "Tribune of the Plebs".

Winners will be announced and awarded with suitable laurels the first Thursday evening in July (July 2).

There will be a handful of ODMS gamers running events at Spring Fever. I hope that as many of you as possible can make it!
Newer Posts Older Posts Home
Subscribe to: Posts (Atom)