The ODMS summer convention was hosted by the Virginia War Museum this year, and they did a great job of accommodating us.  In fact, ODMS member Chris Garcia, also the Education Director of the Museum, did a fabulous job of coordinating the whole thing.

In the end, we had dozens of great games, and they looked great set among the military displays and galleries of the museum.  We had a few brave vendors who attended the show (including some of our best supporters, such as Dragon's Hoard, the Phalanx Consortium, and Silver Eagle Wargame Supplies).

We don't have final numbers yet, but there were hundreds of attendees over the three days at the Museum, but they were spread out so it did not look busy at any one time.

Some excellent games were hosted, and played, and I personally got to sit in on Stephen P.'s English Civil War game, using Warlord's Pike & Shotte rules.  Here are some pictures of the many great games.


So, after several different venues for our conventions over the past year (starting out with the Ramada last Guns of August, then the Williamsburg Muster was held over Memorial Day weekend at the Doubletree, and now this year Guns of August was held in the Hotel) we are returning to a traditional time and place for Williamsburg Muster 2018.  Watch this blog, and our facebook groups, for information on that convention.  It's not too early to start planning your games!
5 comments: 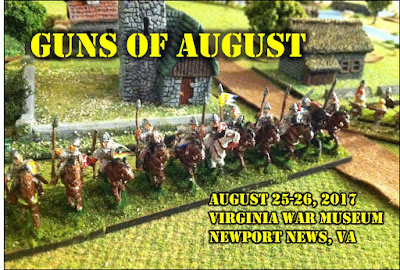