Search for the Quantum Eagle

This is an AAR from a Combat: Alien War Game from the 2011 Guns of August convention by Alex Hoover. I suspect that Alex and his crew will be back with more C:AW gaming at Williamsburg Muster 2012.

A progressive scenario of small sci-fi skirmishes where teams brave hostile terrain, natives, and each other to retrieve a mysterious alien artifact played at ODMS’ Guns of August convention, 2011. 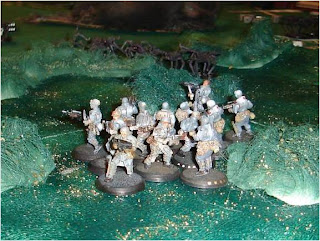 Mission Briefing: Scientists have detected an anomalous reading originating from a remote world that has been of no particular interest to date. The signals are a closely protected state secret, so obviously, everybody in the galaxy knows about it. A squad of US Marines has been detached to locate and retrieve the source of the anomaly and will be racing against teams from rival nations, privateers, mercenaries, rebel groups, and "entrepreneurs" to be the first to grab the glory. This world, as uninteresting as it is, has been charted by the United States and volumes of data about it have been published in official ledgers. As such, nobody is sure what they will find there. This scenario used the following squad level teams:


The game was conducted in a progressive campaign of three vignettes. In the first vignette, a player had to get his squad across a 2’x2’ board, corner to corner. Another player played the local fauna, the Krgrgkrt (no guns, but pick the best of two dice during close combat), starting in the other two corners, whose goal was to eat the squad. The first vignette was run twice, with players swapping squad and bug play. In the second vignette, two players started their teams in adjacent corners and had to transit to their own opposite corner, obviously inhibited by the other team. Wounded combatants who made it off the board were given a stim-pack, so they were back to full up around for the second vignette. Wounded combatants left on the board became Krgrgkt snacks. The third vignette pushed all the boards together, with a hole in the center for the “Quantum Eagle” a millennial-old crashed space ship from an unknown alien culture. All the surviving teams started on the outskirts of the board and had to get a “scan” of the QE from each of the four corners. Scanning didn’t take a turn, it just required a team member to end is turn on a corner of the terrain piece. Three extra squads of six Krgrgkrt were added to the board and played by the umpire, since it sounded like a good idea. 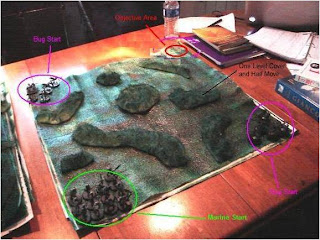 a typical setup for a bug scenario


The terrain used had two effects. First running was limited to 3+d6 inches to simulate swampiness and to keep it from being too easy to dash across the board. The tufts of marsh grass both cut movement rate to half to cross and provided one level of cover. Setups varied board to board, and players swapped out to different boards for different vignettes. 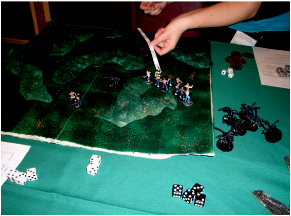 While the idea for the three progressive vignettes was very structured and flowing, the actual play at the convention was a little less so. We had quite a few walk-ups, a few people who just played a quick one-off vignette waiting for another game (which says nice things about the rules that you can do that), and a few initial vignettes when one of the referees would play the bugs to accommodate the walkups. 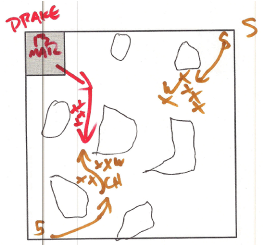 The bug vignettes played out fairly well with players getting a good chance to exercise the rules in simplified combat (only one side with guns). All the squads played out fairly evenly and proved to be a significant over-match for the bugs, but at an expense of 20-25% of their forces. 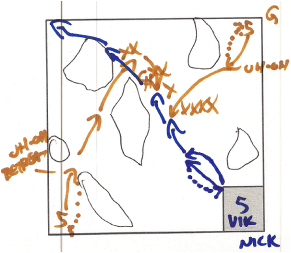 The most common tactic was to first sprint to what looked like a good location for a stand, then open up on the bugs. Several Marine players discussed the merits of suppressing one squad of bugs and trying to outmaneuver the other, however, none actually did that. It is probably a little different in the abstract and when the bugs are up in your grill. A few players did successfully charge one element of bugs, raining lead, then blow through on that side. Falling back and picking bugs off at long range (even through the cover) was also effective. One bug player was able to eat an alien squad down to one solider left. We let that player have a try with another team. 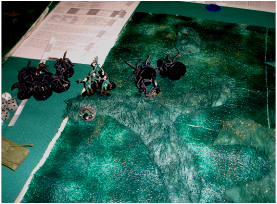 After taking a few lumps and drawing a little blood, the second vignette ran fairly smoothly as well. While tactics tended to be a little more conservative (perhaps thinking ahead to the third vignette), taking a few potshots and lobbing a grenade or two, while keeping mobile was the order of the day. There was a little bit of confusion a time or two when a “Mad as Hell” retaliation during an interrupt action turned into a “Who the Hell’s turn is it?” Those were quickly sorted out after a couple of deep breaths. Only one player decidedly left a string of wounded behind (playing the alien team with the uzi titin’ monkeys pictured above, lower right), but a few early casualties were left behind to ensure a team would make it all the way across the board. The four vignettes on the table.
Tracks of the action in two of the vignettes . . . 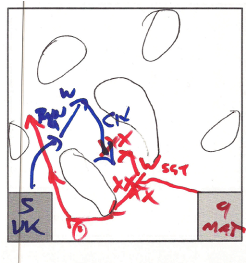 And the fourth one 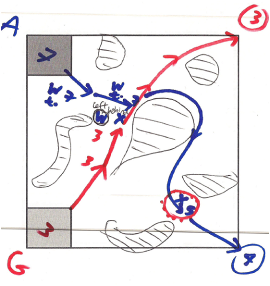 The final vignette, the all-in race to capture the data on the Quantum Eagle for your side, ended up playing relatively smoothly. Major questions were ironed out in the initial play, so the players were pretty much autonomous. The militia squad was able to use their numbers effectively, both in spreading out and using a little bit of meat-shield tactics. The mercs were able to effectively press their skill advantage by just muscling at everything in sight (including charging into close combat with bugs!). The multiple SSW carried by the Marine squad was put to good use clearing them an open path to the objective. The alien team found it relatively easy to split up and hit the corners of the QE, securing the first couple of scans. While the Marines did a good job taking out the bugs at range with heavy firepower (and were the only team to have all their combatants who entered the final scenario survive), it bogged them down a little, so they were late getting to the objective. The mercenaries pretty much brute forced their way to getting three scans first. However, the militia made a mad sprint (with some excellent 9” run rolls) late in the game and was able to secure three scans in one turn, winning the game. 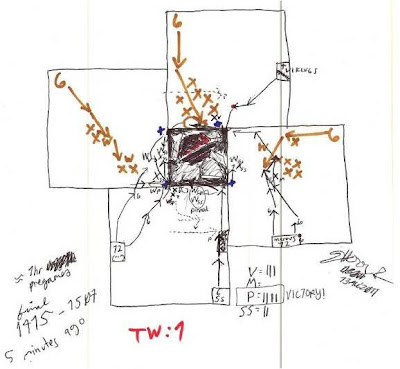 From Alex: lessee ... i ‘member the bugs are yellow and the “vikings” were the minis for one of the merc teams ... ~ a 50min scenario ... X’s are killed figures and W’s are wounded ... dotted lines are for “tactical repositioning to the rear ... also, though I thought the shirtless tattooed minis I made were rednecks, but everyone else was calling them “pirates,” hence the “P” ... everything else is self explanatory, right? 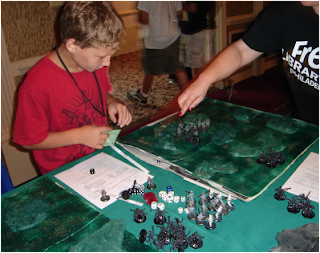 A referee providing some guidance on the finer points of bug-slaughter. 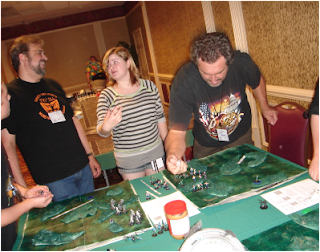 Peanut butter logistics were key to keeping the forces marching in the marshes. 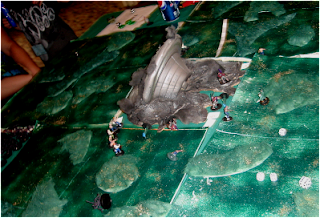 The militia readies for a final push to win the game!

Hello - John Snelling is trying to move a pretty large collection of miniatures. Write to him for lists and details - johnsnelling@live.com

Write to John for details...