This is a fun, and somewhat different than usual, wargaming experience.  I have seen (and participated) in games that used this concept in several ways.  These include: 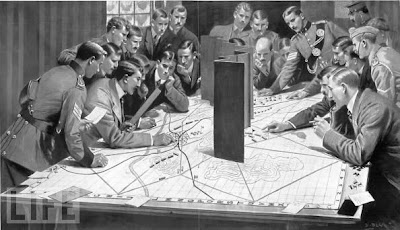 Double Blind Setup - a sheet or screen is set up on the tabletop - both sides then set up their units, up to the screen, anywhere on the table.  Can lead to exciting and hilarious results, usually results in a great game.

Double Blind Throughout - both sides have some information hidden from each other.  This could be from using generic markers for units; from not having units on the board (using hidden map movement); or from using dummy markers/units to do feints.  This can be generally very exciting, although it is handled best with a referee.

Double Blind for some players - This one was done best, years ago at the old Hampton "Campaign Headquarters" store (a great wargaming shop, if there ever was one), during an extravaganza Kursk game.  The game was talked about for weeks and involved most of the regulars at the shop.  The tactical moves and combat were done on an extremely large wargaming table (I think it consisted of a 6x12 and two 5x9s) by tactical commanders on both the German and Russian sides.  However they had to act under orders from their respective commanders - who were sitting in another room with just paper maps, pizza, and beer.  Every other turn the German C-in-C could get updates from his tactical commanders (and then mark up his map, and issue orders, dedicate artillery, etc).  The Russian C-in-C was limited to every third turn.  It was great.  A lot of vodka was consumed that night by the Russian side (I was a Russian infantry commander).

What are your experiences, and what would you like to see ODMS try out in this area?  Please comment...
3 comments:

Notice posted by Duncan Adams about the upcoming HAWKS convention -

To be held Archbishop Curley High School in Baltimore.

A one day historical miniatures mini-convention in Baltimore Maryland, for all periods and scales.

Admission $8 at the door. FREE admission for Children under 13 (with adult)

For Info: http://www.bucksurdu.com/Barrage/barrage2010.html
Draft PEL is in work now.

Coming from North of Baltimore take I-95 South. About 3 miles below I-695 (the Beltway) at the I-95/I-895 split, get in the RIGHT lanes and take I-895. About 1/2 mile beyond the split take the Moravia Road exit. Turn right onto Moravia Road and go about 0.7 mile to Sinclair Lane. Turn left on Sinclair Lane and go about 1 mile to the school on the left. OR take exit 32 South (Belair Road) off I-695, (the Beltway). This is the exit just West of the I-95/I-695 intersection. Go about 3.5 miles to Moravia Road. Turn left on Moravia, and about 1 mile later right on Sinclair lane. Again, about 1 mile to the school on the left.

From South of Baltimore, take I-95 through the Fort McHenry tunnel. About 3 miles later take the Moravia Road exit. bout 2 miles later turn left onto Sinclair Lane, and again about 1 mile to the school, on the left.

Ammunition Rules for Wings of War

The following great article is from John Snelling . . . 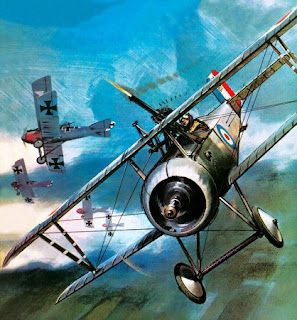 Tried ammo restrictions with WoW Thursday and really enjoyed it. It also evens out 2 seaters vs the single seat fighters. Here is the rules.
Try them I think you will like them.

These rules are now standard in my games. You will need a six-sided die and pencil and a pad of paper to record the following; one person on each team can record the ammo counts of a dozen aircraft with ease.

Firing Guns
Regarding guns and bullets, historically the Lewis gun had a 97-round magazine (we'll say 100) while the Spandau had 500 and the others (ie Vickers, Schwarzlose 400). Parabellum treated same as Lewis. Rates of Fire for each gun were close so this factor becomes negligable. Thus the ammo counts for each gun are:
- Spandau 25
- Vickers 20
- Schwartlose 15
- Lewis 5
A long range shot use 2 ammo counts, short range uses 1 ammo counts. Thus the Lewis can only fire three times (2.5 rounded up) at long range, or 5 times at short range, or a combination. Once ammo is depleted it is gone, but Lewis and Parabellum guns can reload. Each pilot has an initial load plus 2 reloads (15 counts); rear gunner has initial plus 4 reloads.

Reloading and Unjamming
Green jam card jams one gun (ie half of a twin-barrelled Spandau); red card jams all firing guns. A partially jammed Spandau (or Vickers or SE5a mixed weaponry) can still fire, but as "B" damage instead of "A" damage. Gun jam counter for a pilot is only removed if:
- plane is not on fire
- plane flies straight maneouver that is not part of immelman or overdive
- pilot not involved in shooting or reloading
Reloading follows similar procedure with respect to plane on fire and plane flying a true straight maneouver. Only one barrel/gun can be unjammed at a time. If the SE5a Vickers/Lewis gun suffers a partial jam, roll the 1D6 die: 1-3 = Lewis; 4-6 = Vickers.

Sounds complicated, but it's not.

On top of this, I add historical airframe realism:
- Nieuport 11 and Fokker A.III receive four gun jam counters instead of three (no Foster or other mount to help pilot access gun)
- Schwarzlose equipped Albatross D.III and Aviatik D.1 receive one permanently jammed barrel if a red gun jam card is drawn, non-Schwarzlose planes are not affected (I have another chart showing aircraft availability and selection)
- Pflaz D.III cannot unjam (it couldn't due to pilot inaccessibility; but problem was rectified with D.IIIa variant)
- Albatross D.V and D.Va only get 2 jam counters - these aircraft had a forced trim on the control stick which centered it, arguably making it easier for a pilot to focus attention on other matters (such as unjamming) 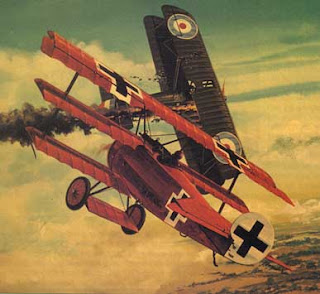 Coming Up in February will be our club's third Winter convention!

If you haven't already done so - stop by the website and register to run a game!

The crowd at our shows come to play games. The more the better, and there is no better way to try out a new idea, ruleset or army. And you'll make some more friends in the Wargaming world.

So, support ODMS by supporting the convention - and the best way to do that is to run and play games. See you in February!