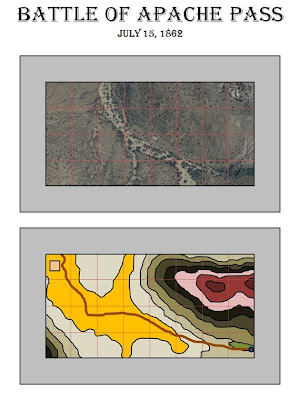 I now have the terrain elevations, courtesy of a quick google search for topographical maps of Apache Pass. I did not record the name of the site where I found them, but it was nice because it let you pinpoint landmarks on the satellite image.
Eight (8) elevations should make Outlook Ridge (the first part of it is what looks like a hill here, extending off the righthand side of the table, above the spring) a pretty impressive elevation, all the more so when the players see that it will be made from 2" thick insulation sheets and 16" tall.
For terrain that I plan to keep, I like to use the high density foam (blue or pink), but for this project I am using beadboard - the styrofoam that breaks into little beads when you break it. That cuts way down on cost because the beadboard is about 1/4 of the price of the high density foam (making it must less painful to part with the terrain at the end of the convention).
I'm still researching the vegetation, because it is clear to me that I am going to need a lot of it to get the look right. So far, I have a few bags of Woodland scenics 3/4" to 2" tall trees that will become passable mesquite trees with a bit of work and a very modest amount of foliage, but I want to add some other types of vegetation, rocks, etc. to get the look right.
I'm also still thinking about how to do the dry wash. A latex riverbed filled in with sand and vegetation seems like the right way to go on it, with one or two pieces to make it (a significant limiting factor is the availability of a large enough sheet of glass to serve as the bottom of the mold for the latex pour.
The next post should have some photos of the terrain as I move this project from the PC to the garage and start cutting the beadboard for the elevations.
No comments:

I've chosen a historic battle as the basis of my western scenario at Guns Of August - the Battle of Apache Pass, fought in July 1862 in Arizona. I found the movie poster you see here at http://www.posterpalace.com/.
Wikipedia gives a concise background for the battle at http://en.wikipedia.org/wiki/Battle_of_Apache_Pass
Converting the forces to units for "The Tomahawk & The Flame" and fudging the math a bit to stay within my budget and minimize wasted figures (Old Glory's 25mm figures are sold with 30 infantry or 10 cavalry to a pack), I end up with the following:

US Army: Captain Roberts in command of 3 infantry companies (10 men in each) from the 1st California Infantry, an attached battery of two 12 lb. mountain howitzers, and a cavalry escort from the 2nd Regiment of California Volunteer Cavalry (10 men); 5 total units, suitable for 2 players.

Apache: Two commanders - Mangas Coloradas and Cochise, each in command of 6 warbands (10 men in each); 12 total units, suitable for 4 players.

Note that the conversions above have 1 figure on tabletop for every 4 men in the battle; this is simply a concession to the realities of limited time and budgets :)
To keep the game looking like a western battle, I want to ensure that I give the units plenty of room to maneuver, so I plan to use a 4ft deep and 9ft wide table (this also leaves room around the edges of the 5ft x 10ft convention table for dice, reference sheets, etc).
Unusual for this battle, the Apache used stone breastworks until they were driven from them by the fire of the mountain howitzers. The only other terrain piece mentioned in the battle is an abandoned Butterfield Overland Mail station, which I plan to represent with this Old Glory "Medium Stucco House" http://oldglory25s.com/images/H-2.jpg.
Next steps - laying out the battlefield elevations and placing my orders.
No comments:

The "War From A Horse" theme has me thinking about games that I want to run at Guns Of August 2011 (August 12-14, Williamsburg, VA).
With the many westerns I watched as a child for inspiration, my favorite idea thus far is a Wild West game using 28mm figures and "Tomahawk & The Flame" rules (of course based on TSATF).
Simply to ensure that everything comes together before the convention (177 days away) I'm thinking that I need to have one side mounted and the other mostly dismounted, with roughly balanced troop quality on both sides, so a punitive mission by US Cavalry against an Apache camp sounds just about perfect.
For figures, I'm pretty much sold on the Old Glory "War Paint" 28mm range. 15mm is of course more affordable, but I like the visual appeal of 28mm figures. Brian C can take credit for that...
For terrain, I'll use a hot knife to carve insulation foamboard and add wood chips to make some attractive and affordable canyons, mesas, etc. A good tutorial on these methods is at http://www.quindia.com/studioarticles.htm.
For the Apache camp, Acheson Creations has several 28mm pieces that I like - the Sioux tepee and the campfire are obviously useful, but I think I'll need to scratch build a horse corral.
That's it for now. I'll update this post as the game starts to take shape.
2 comments:

The convention weekend started for us (on the committee) months ago, as we did a lot of planning and contacting of vendors, GMs, raffle supporters, the hotel, etc.  During this phase, the slow but steady buildup of duties and anticipation of the convention reminded me a lot of "Saturn: The Bringer of Old Age" by Holst   It starts out quiet and you almost don't notice it, but it builds.  Still subtle, but before you know it, there is an urgency...

About a month before the show, in early January, things really pick up.  Stuff starts coming together.  At this point it is well ordered and everything looks fine.  The 3rd of the Brandenburg Concertos (J.S. Bach) comes to mind - in my mind one of the greatest testaments to the Human Mind and its ability to construct order out of nothing.

Soon, it is the week before the convention and a lot is not done.  Things go from orderly to scary.  The demons begin rising up out of the schedule, and stuff gets lost.  It should have been done two weeks ago, but human beings haven't changed for 10,000 years.  Chuck Time rules (ask an ODMS member what Chuck Time is).  At this point, the scene goes to Mussorgsky and his perfect Night on Bald Mountain.


Thursday the tables are set up, and the Vendors start coming in with their treasures.  Watching those guys trudge all that great stuff in has to be accompanied by the Volga Boatmen Song, and no version is as pure as the one sung by the Red Army in 1965 (as old as me).
Finally, at about 1:00 on Friday, the first miniatures games start.  This really brought up a couple of things in my mind.  First, I thought the Triumphal March by Verdi, from Aida . . . but no.  Then I thought of the Prince of Denmark's March (much better) by Clarke.

The tournament players line up - mostly the Flames of War guys - like Monks in their Cells.  If I were a bit more quixotic I might think of something modern and romantic like Mea Culpa by Enigma, but rather I am reminded of Gregorian Chant as they go through the litany of rules and modifiers back and forth. Hail Holy Queen by the Monks of Notre Dame gets the nod here.  Close your eyes and imagine the FoW guys going through the motions while listening . . . but try not to pollute the sacred music too much with whimsy.
In fact, a better option might be the Monk's Chant from Monty Python.

Seeing all the great games set up and playing can only stir (in a wargamer of a certain age) the strings and melody of La Victoire est à Nous.  This version is complete with images from Waterloo, and is a montage along with La vieille Garde and The Girl I left behind me (played during the death scene of Picton).


Finally I get around to running my own game - a large game of The Sword and the Flame - and it is a blast.  This has to be O Fortuna by Orff.

Time comes to pack up and leave the convention.  Saying goodbye to old gamers, fellow brothers from the club, new friends and gaming comrades, and all the great people that make our conventions fun.  This has to be done with only one piece of music - not for me, but for the folks leaving the convention!

The bad part of this year was that I realized sometime Sunday Morning (as people were starting to leave) that the Guns of August flyers we put out were misprinted with the wrong information!  Horrors, my very soul dropped through the floor as I felt bad about this mistake.  It was all my fault, and I tried to tell everyone I could, but the fact is the dates on the flyer were wrong (correct dates below).  This was such a blow, the only thing I felt is summed up by the poet/king David, and set to music in Miserere Mei.

Anyway, I hope you had a good time at Williamsburg Muster, and will think about Guns of August.  We would be glad to spend some time gaming with you.
No comments:

Since we are on the topic of Military Images - the National Guard Image Gallery is online, and the images are in the public domain.  Enjoy! 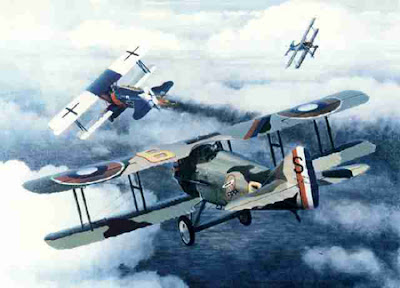 This is a great resource!