A Saturday in November

Okay, so Fall In was a great success for all the ODMS guys who went (Carl and Jim did good in the Dealer's hall; John and Paul did good in the flea market; Lots of good games played by everyone else; Rob bought drinks for the guys in the bar).

This weekend (following a terrible storm - wind, rain, flooding) we played an 1809 game using Shako II rules over at Carl's place. It was a lot of fun.

Austrians vs. Polish. Austrians (John M., James, and Carl) were assaulting across a river against a poorly defended Polish position. Polish (Steven M., Chuck, Erik) were defending against a marshy river crossing, holding on for 7 turns until the Lancers would show up.

Against the common wisdom of the scenario. the Polish did REALLY quite good early on (their artillery was doing well, and the forlorn hope division that Erik commanded across the river did excellent). By the time the Lancers arrived at the battlefield, it was almost all over for the poor Austrians.

This one was so weird (great dice for the Polish, again and again; poor dice for the Austrians) that it almost demands a replay.

Here is a picture of the Shot Up Austrians, beginning to cross the only bridge over the marshy (but fordable) river. 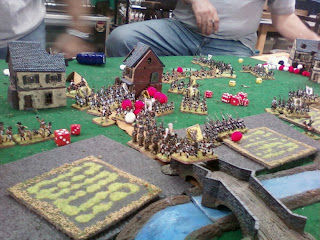