WHAT ARE WE TALKING ABOUT?

One of the things that is rare in the spread of popular current WW2 skirmish games, is the type of game where each maneuver element (i.e. game piece - whether that is a vehicle model, or a stand of infantry models) represents a squad, section, or platoon.  In games such as Chain of Command, Bolt Action, I Ain't Been Shot Mum, or What-a-Tanker each piece represents one entity (a tank represents 1 tank, and a soldier model represents one soldier).  Flames of War was a stranger mix - each vehicle represented one tank (or gun, halftrack, etc) but infantry was mounted on stands, representing (roughly) sections or squads.  Those types of games are fine, but they limit the ability to represent larger battles.

Other games, such as Blitzkrieg Commander (2006) have each piece represent a platoon (this is true, even of the new Pendraken released Version IV).  The newest version of Rapid Fire (1994), Rapid Fire Reloaded, uses a scale where each vehicle (or gun) model represents 5 real life vehicles (roughly a platoon), and an infantry figure represents 15 men, so a stand of two figures represents (roughly) a 30 man platoon. 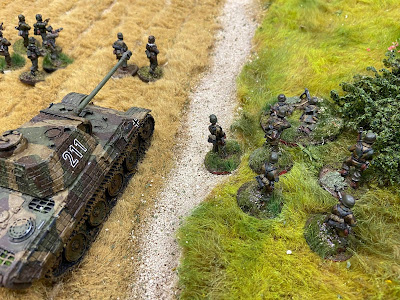 When a stand represents a platoon, or part of a platoon, you don't have as much problem moving your infantry units.  They tend to act as a fighting unit (sometimes with support weapons included, sometimes they are separate stands of models).  When you have rules representing a platoon of tanks as a single model, you don't need as much detail (i.e. "rivet counting") in the tank rules, as you do when you are playing a single tank to tank engagement.  That sort of combat is well represented in many, many rulesets aimed at playing micro armor, and skirmish sets like What a Tanker. 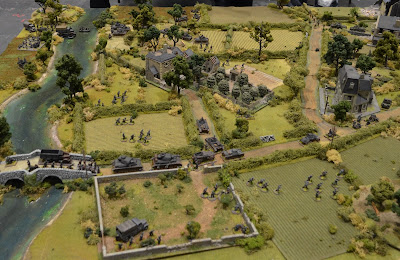 HOW IS ODMS PLAYING THIS SCALE?

Recently I hosted, for ODMS, a Thursday night game using a set of rules that were cobbled together, but that represented this scale fairly well.

They were based on the Neil Thomas World War 2 rules, from his book, "Wargaming an Introduction".  In the book, an infantry section (representing 9 men) is represented on the table top as 9 model soldiers, split up to three stands of three. Shooting and Casualties, in the rules as written, are per man.  However, I borrowed some very good looking house rules from a blog called Sound Officers Call.

With the house rules, we were able to represent infantry as a stand per section, or three sections per platoon.  The sections could act independently from each other, and if the section had an attached heavy weapon team (mortar, HMG, anti-tank weapon, etc), you would signify that with an attached stand with the weapon. 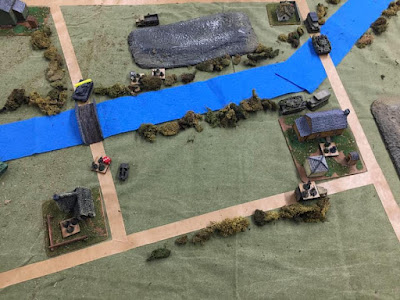 This system worked pretty well, and overall the rules were OKAY, although extremely light weight.  I think the desire would be to dress them up and add a little more detail, without going overboard.  Looking around and discussing online, I got a recommendation to take a look at a ruleset called Ostfront. These are very roughly similar to the modified Neil Thomas rules, but a stand of infantry is either an Assault Infantry section (such as you would find in an armored car, or half track - Panzer grenadiers, or US Armored Infantry), or a half platoon (with two stands needed to make a platoon).  One of the benefits of the Ostfront rules over the Neil Thomas is that there is just a little more detail to the vehicles and weapons.  The mechanisms for shooting and killing are the same (tank and antitank - roll 1d6 to hit, and 1d6 for effect; infantry similar).  It has much better rules to integrate artillery, field guns, and soft transport vehicles, all without adding to the complexity of the rules. Because vehicles have more detail to them, there are national OB books, such as this one on the Soviet Forces. However, there is also a quick-fire (quick start) version of the rules, that also contains basic vehicle information for US, German, British and Russian nationalities.

WHAT ELSE IS THERE?

Other similar scale games include Crossfire (1996) - which focuses primarily on Infantry.  Here the stands represent sections, but are kept together in platoons (three sections, and a commander, make up a platoon), and groups of platoons make companies and eventually battalions. Crossfire has a lot going for it as an innovative rule set, but the representation scale allows the player to make battalion command level decisions.  Poor Bloody Infantry, from Peter Pig, is similar to this.  A unit is a platoon, but it might include a stand for the platoon command, and two stands for LMGs, and then 4 or 5 stands for infantry rifle groups.  Altogether, a platoon.  Rommel, a great system from Sam Mustafa, is larger level of abstraction, where an element (vehicle or stand of infantry) is representing a whole company. 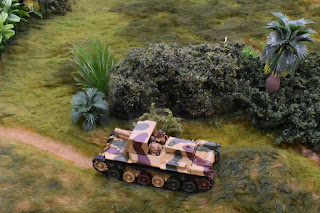 Older rule sets at this scale would have to include Command Decision (1986), originally from GDW. The Angriffe (1968) rules had infantry stands, representing a group, although like the unmodified Neil Thomas rules,  group of 10 infantry was recommended to be represented on the tabletop by a stand with 10 model soldiers (so command by group, but represented 1 to 1).  One area where the 1 model representing a platoon vibe really took hold - and where a player (or side of players) would be commanding a battlefield force representing (more or less) a battalion or two, was the Series 76 scenarios that Gene McCoy published in his Wargamer's Digest magazine.  Those were quite excellent, and over the years pieces and parts of a ruleset were hinted at by Gene, or you could play it using either Angriffe or Tractics, but each model represented a platoon of vehicles, or a stand of infantry represented a platoon of infantry.

BENEFITS OF THIS SCALE

The benefit of games at this scale (rather than at the 1 miniature = 1 soldier scale) is that you can act as if you are a Battalion Commander.  Making the sorts of rules, and commanding the support equipment that a Battalion Commander would have.  In command, a player would normally be concerned with the actions of two units below his/her level (as described by some, for real life command situations).  So, a Battalion commander would be concerned with the actions of Companies and Platoons.  The commander would have access to support elements such as artillery and maybe could tap into elements from up to 2 levels above him, with permission, but is concerned with the scenario and battlefield objectives that a battalion commander would focus on.  This opens up a very wide variety of wargaming scenarios - much more so than the player who is running individual soldiers (such as in Bolt Action or Chain of Command).

Ever since the sharp decline of interest in Flames of War a few years ago, ODMS has not had a lot of 15mm WW2 action.  We had a lot of micro-armor being played in 2019 before the pandemic, and likewise a lot of 28mm skirmish (with Bolt Action and What-A-Tanker!).  Hopefully we will be playing some more 15mm WW2 very soon.