Cliff is announcing the following game - at the Hangar! 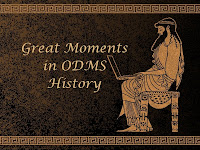 This week, at the ODMS meeting at the Hangar, we played a game of Warhammer Ancient Battles, modeled (loosely) after the great and terrible conflicts of the Punic Wars (such as the battles of Trebbia, Lake Trasimene, Cannae, or later, Zama). More appropriately it was modeled after a bunch of aging wargamers in denial about their lumbago, but still wanting to roll dice and boast about it.

Leading the Carthaginian Horde was General Paulus Barco. Named "Paulus Decrepticus" by his ardent follows, and some besmirching roman historians. More importantly than his knowledge of the period, and his love of wargaming, are perhaps the facts that he owns the singularly most beautiful Carthaginian army in 28mm that I have ever seen. And a copy of the Warhammer Hannibal book. Paulus was overall commander of the Carthaginian horde, and on the field he commanded the Carthaginian Left - consisting of the Punic Heavy Cavalry, and the African Infantry, and the Punic Veteran Infantry. Oh yeah, he also suffered from some disease called Ligurians. Or is that a pasta dish? In the game, they were some unit of barbarian infantry, also known as the Ligurian Mixed Weapons of Sudden Doom. In addition he had a unit of Balearic Slingers of Death. Ah, yes. There are also the War Elephants. All in all, Paulus Decrepticus was a very able commander in the game. But on the Carthaginian staff, he was not alone. In general the fighting was pretty thick on the Carthaginian Left. Paulus was facing the Roman Consul Brianus of Tampa (he's not there yet), but more on him later.

General Darylius commanded the remainder of the Carthaginian battleline of heavy infantry, complementing General Paulus' African and Punic infantry with two additional units of African Infantry. It is possible that these formations are based on the Sacred Band of Carthage (from the Fourth Century, famous for participating in the Third Punic War, and distinguishing themselves at the battle of Crimissus in Sicily, 340 BC). On the other hand, it is equally likely that they are based on the sacred band of Doobie Brothers. I am not sure how the formations were modeled in the Hannibal book, but in this alternate list from Tony Edwards and the St. Louis area WAB players, they model the Citizen infantry with a WS of only 2. Stinky!

Finally, on the Carthaginian right, was general Davidian the Fanatici. It is worth noting that General Davidian only ever fights on the right, and never on the left.

He was left with the unenviable task of facing Consul Chuckus Maximus (brave stalwart of Rome, and wielder of the sacred pen). General Davidian was left with three units of Skirmishing infantry, and three units of light Cavalry. With these he did very well against his opponent, but will always be remembered more for the fact that he had Negroid Numidians, rather than Semitic Numidians. Evidently a point of contention for those involved in the battle. They were considered to be "berbers" according to Livy, but what did he know. General Davidian had a couple of units of his skirmishing infantry (of dubious national origin) face off against some Light Legionaires, and given the better equipment and training of the legionaires, they fared poorly. There was a unit of Spanish, however who, in addition to be Sneaky (see countless BlackAdder references on sneaky Spanish for reference - "Pardon me, Meeester"), fought rather well in the rocky terrain on that part of the battlefield. General Davidian assures us that soon, he will introduce us to his galley, which is named Sally.

On the Roman side we had the overall commander being Consul Brianus of Tampa (he's not there yet).

He commanded troops on the right, favoring a Strong Infantry Formation. Consul Brianus (he's not there yet) was in command of four strong (24 figure) formations of Roman Legionaires. A powerful group of figures, led by his personal figure, and a Lictor bearing his personal standard. After some maneuvering, and Dealing with the Balearic Slingers of Death, and the Ligurian Mixed Weapons of Sudden Doom he was able to finally come to grips with the real meat of General Paulus Decrepticus. That meant fighting the African Infantry, the Veteran Infantry, and the Elephants. All in all, Consul Brianus (he's not there yet) performed very well. Those Legionaires are really worth the points they cost, don't be deceived. Being Drilled and Stubborn (no, that is not a comment on their lifestyle) is an incredible benefit. And they have great equipment options. We (Roman Wargames Commanders) should thank those ancient Italian guys for having such great foresight. Oh, at this point it should be pointed out that this battle is a complete farce. The Roman side used the Early Imperial Roman army list, rather than the Consular Army List from Spartacus, or the Republican Roman army list from either Hannibal or Ancient Armies. This is because the Roman players did not have the correct figures available to them, in sufficient numbers to use those lists. Meh. To quote Donaldus Rumsfeldus (another famous Roman Consul), "You go to war with the army you have." 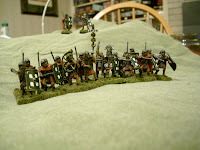 The Roman Center was commanded by a sort of anomaly. Sir Scott of Calais, a Norman Knight, was on lend lease to the Roman Army, by way of student exchange program.

He was in the center, and commanded a unit of Legionaires, a Scorpion (rock you like a hurricane), and a unit of Lanciarii (Light Legionaires). They fared against General Darylius, from the Provinces. Sir Scott (lacking anything riding a warhorse, and in the unseemly scale of 28mm) did pretty well against the competition, and in fact was able to poke General Paulus' elephants a couple of times with the Scorpion. As Sir Scott has a number of additional Unpainted Roman Figures, but now has time and a place to paint, perhaps we shall see more of him in 28mm in the future. Other than poking the elephant with the Scorpion, he also was able to use the cool Drilled infantry skill of sidestepping against an Elephant charge. He was therefore fighting not only General Darylius but also General Paulus.

Finally, on the Roman Left, facing the Carthaginian Right, there is Consul Chuckus Maximus, whose idea the whole thing was in the first place. However, it would not have been possible without the assistance of General Paulus and Consul Brianus (he's not there yet). 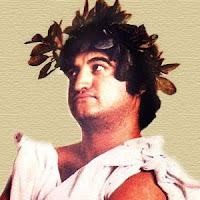 Consul Chuckus commanded two large (24 figure) units of Veteran Legionaires, upgraded with heavy army, and a single unit of Lanciarii (Light Legionaires, upgraded with slings). His second unit of Lanciarii was given to the able Sir Scott in the center. Leading this band of merry Roman ne'r do wells was the Consul himself, and a personal Standard. Facing off against Consul Chuckus was General Davidian. Although there was a fierce fight between the Skirmishing infantry of dubious national origin and the Roman Lanciarii (which the Romans won), the Lanciarii subsequently found themselves trapped between Spanish infantry ("Pardon me Meester") and some Spanish light cavalry. The Lanciarii went out whirring their slings. That is not code talk.

The game was a lot of fun, but it went rather slowly (probably due to rustiness on the rules, and also starting late). Next time, agree to points ahead of time and have the battle lists ready.

Also present at the game were the usual ODMS worthies. Carl, Justin, Snelling and John Dent were there. 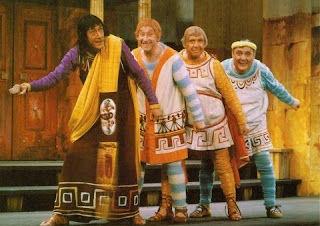 Danny Jackson made an appearance. He mentioned his ancient rules (Danhammer) and is looking to set up a game. 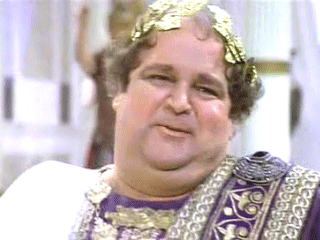 Oscar was there, and is interested in more Blitzkrieg Commander and Cold War Commander. 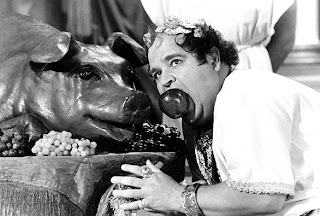 Unfortunately, noticeably absent were both Krigbaum and Josephus. Rumor has it that Krigbaum is really quite busy, and that Josephus has been taking private tutor lessons from a baby squirrel on how to look cute for his girlfriend. Maybe we'll see both of them at the next game session. 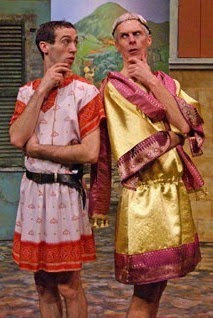