We missed several annual business meetings, and officer elections, during 2020-2021, mostly due to the great COVID disruption.  However, in August of 2022, we had an emergency out-of-cycle annual meeting, that took place at the Guns of August convention in Newport News.

The newly elected officers are:

The five at large board members are:

In spring of 2023, we plan to return to our usual annual tempo of meetings, which means that we will have elections each year, for roughly half of our officers. 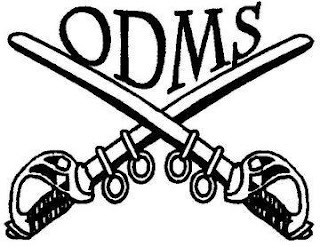 Wars of the Republic - a short review 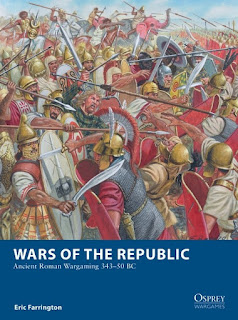 Last night (March 3, 2022) we had a play through of Wars of the Republic. This is a ruleset published by Osprey, written by Eric Farrington, and based on his earlier ruleset, Men of Bronze.
Here is a short analytical review.
There are a lot of things going on with this ruleset, so I am going to break this review up into 5 different areas:
1. Look/Presentation
2. Organization/Ease of Use
3. Rules Systems
4. Troop Types/Army Lists
5. Scenarios, Campaigns, Extras
1. Look - like all the Osprey wargaming books, this one looks great with lots of artwork from Osprey pubs of the period of about 500BC up to about the year 1AD. Great cover art, great interior art. Only complaint - some of the charts have small print - although here it is much better than in some of the earlier Osprey wargame books.
2. Organization/Ease of Use - The book is organized pretty well. Starts out with defining concepts and assumptions, then the turn sequence, then the basic mechanics (move, shoot, fight, morale) and then extra abilities. This is all followed up by some scenarios (fictional and historical), and a set of campaign rules. As far as Ease of Use - there are some big problems with out the turn sequence and activation language is presented (some inconsistencies, and some contradictions) - these would benefit very greatly from a detailed phase by phase example
3. Rules Systems - I like all the rule subsystems, they work well. The turn structure (and what counts as an activation, and what doesn't) needs some more explanation or examples, see above, but otherwise the basics of move, shoot, fight and how it is executed is well presented (this is what makes me want to get info from the author and play again).
4. Troop Types - all the basic troop types you would expect are here, however we had some serious questions about some of the values used. For instance, once a Roman Legion unit (of any of several types available) goes into "Legion" formation, it is all but indestructible. This does not ring true with some of the battle results from the ancient sources. Other formations seem a lot more sensible, but "Legion" crosses a line. Also, one or two troop types have problematic values, which might arise from typos (such as Light Infantry having a value called "Courage" which represents your ability to absorb hits - it is higher for Light Infantry than it is for Legion or Phalanx troops....). The Army Lists, in terms of units and numbers are pretty good, but the point system is too simple to be useful - there are some real discrepancies when you compare units of the same cost...
5. Scenarios, Campaigns, Etc - Great scenarios and campaign rules, could be useful here or maybe adapted to other rules systems. Reminds me of the scenarios, etc, you get in both Warhammer Ancients products and also some of the SAGA books. One thing missing - a Quick Reference Sheet - I made one.
Bottom line - the rules systems are good. Playing the game in a Roman Civil War, or Diadochi (Successors) battle, with similar armies should be fine, but I have written to the author to find out some answers to questions. The points system should be ignored (and only play scenario games) or revamped.
Prognosis - probably worth trying to tinker with, although there are a lot of good rule sets out there for Ancients.
No comments:
Newer Posts Older Posts Home
Subscribe to: Posts (Atom)