A great time playing Shako, hosted by Wayne. See the posting over at Gaming with Chuck.

Also, Cliff had an older (but still looked quite nice) campaign system for ACW gaming, and he was working with Justin on how to modify it to work with the Neil Thomas rules.

Lots of murmurings about the upcoming Guns of August, and also what the club wants to do about attending Southern Front, en masse. We are thinking of running a bunch of games.

While we (those of us playing miniatures) played on in our Shako Game, quite a few of the other guys there played a few rounds of Plague and Pestilence. Always a winner at ODMS.

In all - a great time, although I brought Steam with me, and we never did get to play.

There were, as a consolation prize, some really good meatball sandwiches for everyone.

Okay, everyone in the hobby basically knows that there is a difference between British Wargamers and US Wargamers. Here is the proof . . .

First, we see Edward Woodward (d. in 2009, RIP), a British actor who was also a wargamer. Clean cut, and dapper. Obviously a lover of toy soldiers. 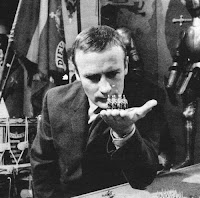 Now we have Carl Sciscio. Sitting at an empty game table, with a gun and a bottle of hooch. Enough said. 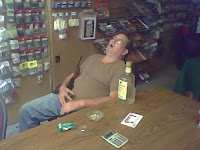 Steven MacCabe will be hosting what sounds like a very cool Shako game, on Saturday June 12, at 6PM. Here is his announcement form the mailing list . . .

The Russians have won the costly 1812 Campaign in Russia. January and February has seen the Russians advance into Poland, crossing the Vistula and Niemen River. The Prussians have risen in revolt and are mobilizing their forces. On Februrary 26, the Prussians and Russians sign a peace treaty.

The Russians have suffered greatly, but they are now on the advance and have the advantage of shorter supply lines than the French. The French now occupy a hostile country. To the south, is the Army of Austria, the only army still intact after the Russian Campaign. They are waiting for the moment to switch sides and go against their ancient enemy and revenge for all the many defeats.

The French are led by the very capable Eugene Geauharnais, who has been left in charge in Germany to reorganize and refit the shattered remanants. Even if a former shell of what advanced into Russia, he has done a brilliant job of fufilling his mission. Napoleon sends the order to make a stand at the Oder River and stop the Russian advance. In defiance of the Emperor, on March 1st, Eugene decides to abandon the Oder River and move his forces back to Berlin rather than confront the Russians.

Fiction:
On March 2nd, Eugene realizes the significance of the Oder River. If he can stop or delay the Russians, it will buy more time for Napoleon to mobilize his forces in France. If he can have a decisive victory, it may alter the course of 1813 completely, with Napoleon being able to trounce the Prussians and the Austrians may decide not to go against the French. And of course, there will be forever the name of Eugene Geauharnais in the anals of history.

Who will you be?

Further, he posted some info about the OB and the scenario. Here it is:

OOB will be out of the Shako Book for 1813 with one bonus selection. Very large fight. Multiple divisions coming in at different times based on Order of March.

I have built a "reserve chart" to determine what turn units are coming in.

Points for finishing each race, as per the current F1 Points System:

The driver with the most points after all 3 races wins the season;
Prize? Maybe : )

Slideshow of our intro to the game a few weeks ago

Hi this is Joseph Berry, Gamemaster for this years D-DAY game.

This game will be held on June 5th the first Saturday in June, at the Hangar (see the ODMS club page for directions). This is are 3rd Annual D-day Game and the Germans have won two years in a row.

It is time for the Allied forces to actually win, hopefully. I have already quite a few people signed up.

There are only 3 German spots left open and 1 British spot, then we are full.

Contact me if you wish to play, there are not a lot of spots open.

The Books that will be used in this D-Day game are D-Minus 1, Bloody Omaha, D-Day and Festung Europa

In this D-Day game there are no tank companies at all. All infantry companies with tank support that’s it.

I will be sending out further details at a later date.

Thanks Joseph strike23462@cox.net
No comments:

This was a great night at the Hangar for ODMS.

Two main games were played, at least while this reporter was still there.

First was the Spanish American War miniatures game. Six players and a referee, having fun with 15mm Spanish-American figures (the old Richard Houston collection, re-released late last year by The Virtual Armchair General). Earlier posts on that game are located here, here and here. Pictures from the game are here. On the Spanish side, the players were Justin Grabowski (C-in-C), David Dietrich, and John Dent. On the US side, the players were Carl Sciscio, Kai Weaver (C-in-C), and Eric Terry. The Spanish were defending a walled town at the top of a hill. The rules were tried out for the first time, and could use a little polish.

The second game played was Horus Heresy, by Ken Whitehurst and Scott Kidd.

More on these later, as well as photos.
No comments:

On the Spain-held island of San Balkano, in the Caribbean, the ring of hills around the Spanish capitol city of Puerto Gris is held by an assortment of Spanish troops from the Spanish Army, the Spanish Foreign Legion, and even Spanish Sailors from the port. The American division under General Rider has decided to break through on a gentle slope known as Green Hill (Colina Verde) against a couple of Spanish held towns. Will the advantage of smokeless powder help the Spanish? Will the elite US Colored troops break through the Spanish defenses? Can the dynamite gun provide all the excitement of a loose meat-log in a convention hotel room? 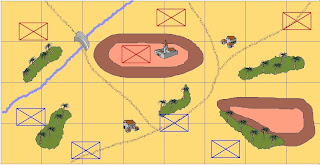 The rules are a modification of Chuck's Russo-Japanese war rules. The major difference (other than for some weapons and tactics of the SAW that differ from the RJW) will be in unit activation. A card for a brigade, draw cards. One brigade from each side gets a bonus move each turn. Should make the game fluid. 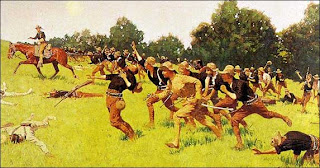 Come on Thursday, May 6, and give the game a try.

Lots of guys showed up at the ODMS swap meet on May 1, at the Hangar. There were lots of things for sale, including toy soldiers, books, games and loads of accessories. No fresh vegetables were available, however, some members of the club brought close to a dozen boxes of donuts, and lots of goodies were cooked on the grill (burgers, hot dogs, etc).

A lot about the Guns of August was discussed, and lots of the guys attending mentioned that they would be either (1) running games, or (2) helping with the staffing of the convention. We need both, but more games are always welcomed!

Other than a lovely and relaxing day spent outside in the shade, talking wargaming and other fun stuff, the evening drew to a close around dinner time with a hand of Naval War. Byron won, probably because he is a world famous wargame designer, and because he brought some watermelon soaked in coconut rum.

A great day, and hopefully we'll have many more at Carl's Place.