April 28 was the club meeting and game day we held at the Virginia War Museum.

There was a room full of gamers there for the ODMS meeting in the morning (10:00am), but by Noon, the number had grown, as we added a few more gamers for a game day.

The games played were two, primarily - Heroes of Normandie, and Hail Caesar.  I was the referee for the Hail Caesar game, so here is the description.  There were six players, three on each side.  The Carthaginian side featured Rich (of CMS), a friend of his (Brian I think), and Justin as overall commander.  The Iberian side featured Richard, Stephen as overall commander, and David as the commander of the Gallic mercenaries.

History
The Carthaginians, during the period following the First Punic War, whence their fortunes were somewhat reduced, were led by the Barca clan to believe that new fortunes could be made by having a reinforced trade colony in Iberia.  Much of that effort was the various ports and colonies on the eastern coast of the Peninsula (Carthago Nova, for instance), but also the Phoenician bad boys wanted to push in country.  This led them to a conflict with the Oretani tribes.

The Phoenicians had established the city of Tartessos at the mouth of the Baetis river, and now they had moved up the river, and constructed an inland port.  Raids by the local Oretani (a mix of Iberian, Celtic, and of course, Celtiberian) warbands made the area unsafe, so the Army was called in.  They moved in from the eastern coast, and began the ponderous job of crossing the river, to pacify the Oretani. 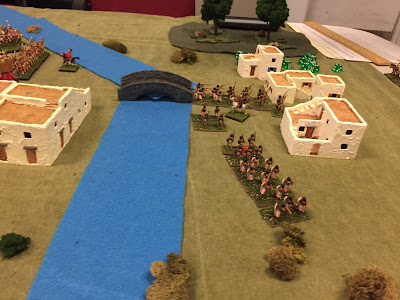 At that time, the Oretani tribes, alerted to the river crossing, struck!  They came down out of the hills and attacked the Carthaginians during their weakest moment, with half the army on each side of the river. 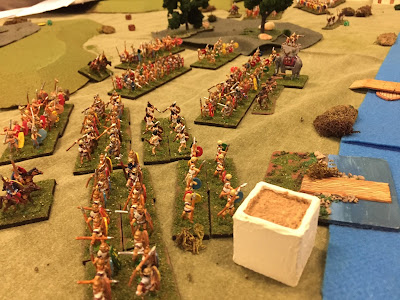 Scenario
In the game, the Carthaginians had four divisions of troops, two on each side of the river.  There was only one permanent (stonework) bridge that had been constructed for the colony, it could accommodate 1 unit of troops, per turn, crossing it.  Each division of troops has 4-5 units in it, so that is a nightmare.  Luckily, the Carthaginians had some engineers along, and were able to construct a hasty pontoon style bridge, to double their crossing capability. 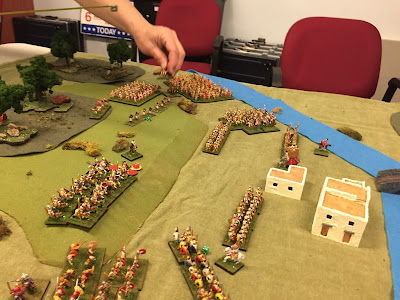 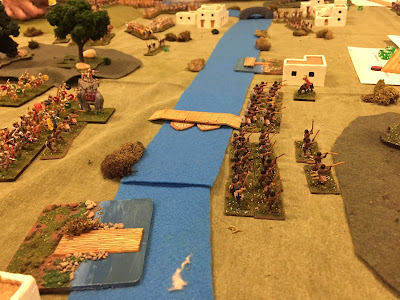 So the pregame decision of the Cartho players was - where to place your pontoon bridge.  Too far up stream, and you lose tactical capability to relieve pressure on the main point of action.  But too far down stream, and you block potential landing areas for reinforcements. 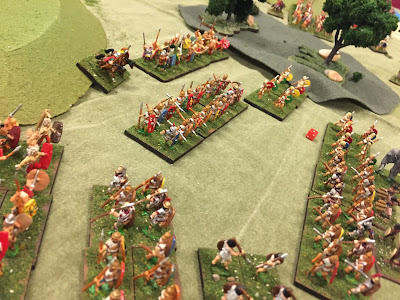 The Iberians, on the other hand, had their own pregame decision.  They had a chest full of Lusitanian silver (as well as some Lusitanian soldiers who joined the cause).  With that silver, they could (1) hire Cilician pirates to attack the Carthaginian reinforcements (and attempt to sink some of them), or (2) hire Gallic Mercenaries.  The Iberian commander chose the second course of action. 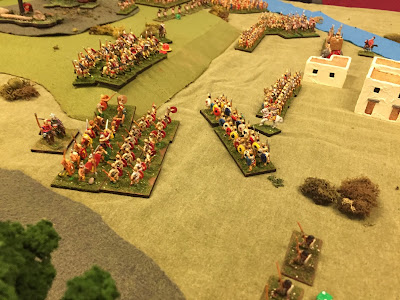 The game was a disaster from the outset for the Carthaginian players.  They were not making their command rolls well, and they were commanded by all newbie players.  The Iberians had a couple of ancients players on their side.  Plus they were making very good command rolls, ensuring good moves (at least in the earliest turns).  Also, the scenario very harshly punished the Carthaginians.  In hindsight, I think I would have (1) made the landing points for the reinforcements more flexible, and (2) allowed more units to cross the bridges each turn.  But the scenario was to be the Barbarians catching a stronger Imperial power, while they were in the act of crossing a bridge.  That succeeded, but it could not have been much fun for the Carthaginians.  In spite of that, however, the Cartho players did seem to have a really good time, and they even had some great tactical successes.  Until the horde of Gauls descended on them - that proved to be too much, and it was time to call it a game. 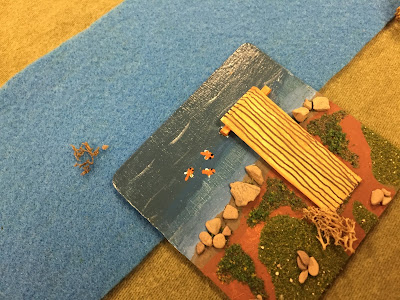 In the meantime, it did encourage me to finish painting the Old Glory buildings used in the game, and to scratch build the pontoon bridge and the mooring spots (piers).  Including "Fisherman's Wharf" - shown here with the infamous Iberian Koi.